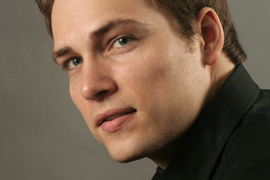 Alek Shrader is the recipient of a Sarah Tucker grant from the Richard Tucker Foundation and a winner of the 2007 Metropolitan Opera National Council Auditions. Shrader, a former Adler Fellow with the San Francisco Opera, made a spectacular mainstage debut in the San Francisco 2008/2009 season, replacing an indisposed Ramon Vargas as Nemorino in two performances of L’Elisir d’Amore. Other opera highlights have included Almaviva in Opera Cleveland’s production of Il Barbiere di Siviglia and Il Re Pastore with Opera Theatre of St. Louis. Mr. Shrader was also a featured soloist in the 2009 Metropolitan Opera Concert in the Park series. Alek made his European debut in the 2009/2010 season as Tamino in Die Zauberflöte at the Grand Theatre de Bordeaux. He also appeared as Almaviva in Il Barbiere di Siviglia, and as Egeo in a new production of Giovanni Simon Mayr’s, Medea in Corinto, both at the Bavarian State Opera in Munich, Germany. At the end of the season, Mr. Shrader made his Santa Fe Opera debut in the title role of Britten’s Albert Herring. Mr Shrader opened the 2010/2011-season with the title role in Berstein’s, Candide in concert performances with the Los Angeles Philharmonic Orchestra, followed by his return to the Bavarian State Opera as Egeo in Medea in Corinto, Belmonte in Die Entfuehrung aus dem Serail and Tamino in Die Zauberflöte. On the concert stage, he gave a recital in Santiago, Spain and made his Wigmore Hall Recital debut with pianist Roger Vignoles. Shrader finishes the season at the Salzburg Festival, where he makes his debut as Ferrando in Cosi fan Tutte. Mr. Shrader begins the 2011-2012 season as Tom Rakewell in The Rake’s Progress with Opera de Lille, followed by Don Ramiro in La Cenerentola at the Hamburg Opera. In the winter, he returns to the U.S. for Tamino in Lyric Opera Chicago’s production of The Magic Flute.