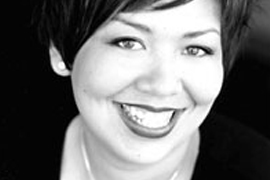 Hailed as a “rich voiced, expressive mezzo soprano” by San Francisco Classical Voice and “appealingly direct and honest in tone and bearing,” by Richard Dyer of the Boston Globe, Nina Yoshida Nelsen was awarded first place in the Regional Metropolitan Opera National Council Auditions, held in Denver, Colorado. She sang in the National Semi-Finals in New York City. Engagements for the 2005-2006 season include Rebecca Nurse in The Crucible with Utah Festival Opera, Tisbe in Cenerentola with Pacific Repertory Opera, Mezzo soloist in Encore! Encore!— a gala concert for Livermore Valley Opera, and Mezzo soloist with the Magic Valley Symphony Orchestra. Ms. Nelsen was a national grand finalist in the prestigious 2005 Loren L. Zachary Society Competition. Nina Yoshida Nelsen spent the 2004-2005 season as an Artist-In-Residence with Orange County Opera where she performed the role of Marquise de Berkenfeld in Daughter of the Regiment in their educational outreach program. Ms. Nelsen made her professional debut with Opera Providence in 2002 as Tisbe in Cenerentola. She subsequently appeared with the company as Dorabella in their English version of Così fan tutte. In 2003 Ms. Nelsen made her European debut singing the title role in Carmen and the role of Antonia’s Mother in Tales of Hoffmann with Komische Kammer Opera of Munich. Also in recent seasons, Nina was heard as Suzuki in Madama Butterfly with Livermore Valley Opera and Kate Pinkerton in Madama Butterfly with Opera Santa Barbara, with whom she also covered the role of Suzuki. Other notable roles include Idamante in Idomeneo, Hermia in A Midsummer Night’s Dream, and Lulu in Lukas Foss’ The Jumping Frog of Calaveras County, all of which she performed with the Opera Institute at Boston University. In 2004, Ms. Nelsen won first prize in the Performing Arts Foundation Vocal Competition, the Profant Foundation Vocal Competition and the Santa Barbara Foundation Vocal Competition. She was a national finalist in the West Bay Opera Superstar Competition and the Palm Springs Opera Competition. Ms. Nelsen, a native of Santa Barbara, CA, earned her M.M. in Vocal Performance from Boston University in 2003, where she was inducted into Pi Kappa Lambda. Nina earned her B.M. from Boston University in Violin Performance and Psychology, where she graduated Magna Cum Laude. Ms. Nelsen currently is at the Academy of Vocal Arts in Philadelphia.