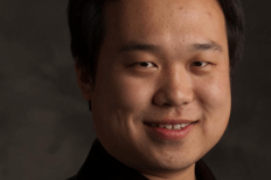 Baritone Ao Li, a third-year Adler Fellow, is a native of Dezhou, China and studied at Shangdong Normal University. In the 2010-2011 Season at San Francisco Opera, he sang the role of Ascanio Petrucci (Lucrezia Borgia) and El Dancairo (Carmen for Families). His recent roles at the Company include Lorenzo (Capuleti e i Montecchi) and Sciarrone (Tosca) and his upcoming roles include Ben Weatherstaff (Secret Garden) and Luther (Tales of Hoffmann). As a participant in the 2010 Merola Opera Program, he sang the role of Belcore in their production of L’Elisir d’Amore. A frequent recitalist in China, Li is a past recipient of the prestigious Youth of China award, third prize in both the Shandong Qilu Style Contest and the Taipei World Chinese Vocal Competition, the bronze award in The People’s Republic of China Ministry of Culture’s Eighth National Vocal Competition, and he was selected as a member of the Young Singer in Shandong Province Tenth Television Competition, where he won an Award of Excellence.