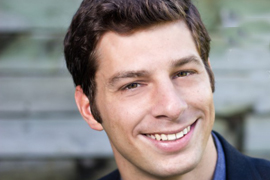 A 2009 Metropolitan Opera Competition Regional Diamond Wendelboe Award Winner and runner-up in the Birmingham Musicale Voice Competiton, Edward Hanlon has recently been seen on the Michigan stage in the U of M productions of Le Nozze di Figaro (Figaro), Albert Herring (Inspectior Budd), Eugene Onegin (Prince Gremin), La Boheme (Colline) and Postcard from Morocco (the Bass). Edward spent the past summer singing with the Chautauqua Opera as the cover in Tosca (the Sacristant) and Pirates of Penzance (Sergeant of Police) as well as performing recitals and revues throughout the summer. Other recent highlights include Pooh-Bah in The Mikado, Baron Zehta in The Merry Widow, and Leonides in Lysistrata at Seagle Music Colony and Publio in La Clemenza di Tito at Toronto Summer Opera Lyric Theatre. In February Edward will be an Apprentice Artist with Michigan Opera Theater and sing the role of Sciarrone in Tosca.