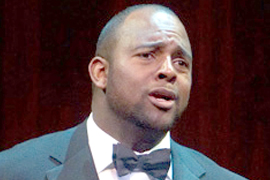 Ryan Speedo Green was formerly a resident artist at Opera Colorado, and, after becoming a winner at the MONC national finals in March 2011, he was accepted into the Met’s Lindemann Young Artist Program. He received his master of music degree from Florida State University, his bachelor of music degree from Hartt School of Music, and was a finalist in the Palm Beach Opera Competition. He recently sang Colline in La Bohème with Opera Colorado, and upcoming are Jake in Porgy and Bess in concert with the Berlin Philharmonic and Bonze in Madama Butterfly, Raimondo in Lucia di Lammermoor, Johann in Werther, and Audebert in the world premiere of Kevin Puts’s Silent Night with Minnesota Opera.