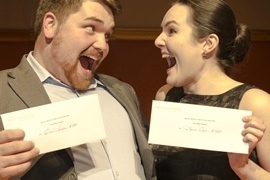 Sarah Coit is a 26 year-old mezzo-soprano, a native of Spring Hill, FL. In the summer of 2015, Sarah was a Gerdine Young Artist with Opera Theatre of St. Louis where she covered Richard in the American Premiere of Handel’s Richard the Lionheart. She is currently a Resident Artist at Utah Opera where she sang the Shepherd, White Cat, and Squirrel in L’Enfant et les sortilèges with the Utah Symphony and performed the role of Mercédès in Carmen. As a member of the 2016 Apprentice Singer Program at the Santa Fe Opera, she covered the role of Erika in Vanessa and was the 2nd cover of Zerlina in Don Giovanni. For the summer of 2017, she will return to the Santa Fe Opera as an Apprentice Singer, singing the role of Alisa in Lucia di Lammermoor and covering the role of Laurene Powell Jobs in the World Premiere of Mason Bates’ The (R)evolution of Steve Jobs. Sarah holds degrees in Music Studies and Theatre Performance from the University of South Florida and a Masters degree from the University of Michigan.

Eric Taylor, a 22 year-old tenor and native of St. George, UT, is currently a music student at Westminster College. He sang Luis in The Gondoliers in 2015 and Frederic in The Pirates of Penzance in 2014, both with Utah Lyric Opera.