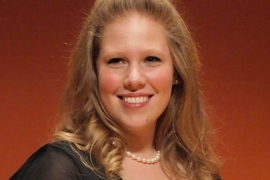 Canadian Soprano, Sarah Cambidge, completed her Masters of Music in Vocal Performance at the University of Denver’s Lamont School of Music. She also received her Bachelors of Music from Lamont in 2011. Some of her recent opera roles include: Susannah (‘Susannah’) in April 2013; the Countess (‘Le Nozze di Figaro’) in both Yakima, Washington and at the Lamont School of Music in April 2012; Marguerite (‘Faust’) and the title role in ‘Suor Angelica’ with Lamont in 2011; Micaela (‘Carmen’) with Lamont in April 2009; and the Second Lady (‘Die Zauberflöte’) at Saltnote Stageworks Music Festival in Washington, DC in July 2008. Mrs. Cambidge has also performed staged scenes including the Governess in Benjamin Britten’s ‘The Turn of the Screw’, Konstanze from ‘Die Entführung aus dem Serail’, Fiordiligi from ‘Così fan tutte’ and Dirce from ‘Medea’. In addition, Mrs. Cambidge has performed with organizations including the Vancouver Recital Society; Vancouver Symphony Orchestra, Spoleto Vocal Arts Symposium in Spoleto, Italy; The Evergreen Chamber Orchestra; The Colorado Youth Symphony Orchestra; Lamont School of Music Symphony; and the Yakima Symphony Orchestra in Yakima, Washington. Mrs. Cambidge was one of the 2013 finalists for the Denver Lyric Opera Guild Competition as well as receiving numerous honors from the Lamont School of Music including the Outstanding Graduate Student in Performance award. In the spring of 2012, she was presented with the Metropolitan Opera Competition’s Young Singer Encouragement Award, and in the Spring of 2011 she was presented with the Denver Lyric Opera Guild Award. Mrs. Cambidge is currently the Guest Artist in Residence for the vocal department at the Denver School of the Arts.