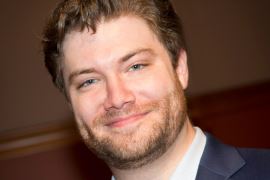 After spending summer performing Betto in Gianni Schicchi, he was invited to join the illustrious Adler Fellowship at San Francisco Opera, where he will spend the next two years. He recently earned an Artist Diploma from the Yale School of Music where he starred as Figaro in Le Nozze di Figaro, Colline in La Bohème, and Don Magnifico in La Cenerentola.