Ellen Harris – Founder of the Metropolitan Opera Auditions in Denver

Historical Sketch by Charles L. Ralph from an Interview May 28, 2003 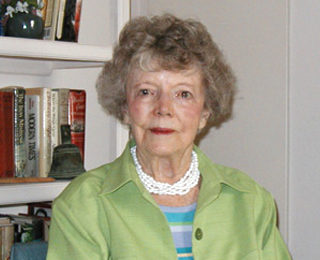 Ellen Gandy, a native of Spokane, WA, attended the University of Washington and graduated with a B.A. from Smith College, Northhampton, MA. She became a newspaper woman, starting as an ad writer and columnist for the Spokesman-Review in Spokane from 1931 to 1936. During a visit to Denver to observe the Denver Post, she met J. Ramsay Harris, a mining lawyer, whom she later married.

Ellen Harris quickly gained prominence in the political affairs of Colorado, becoming a member of the Denver Election Commission in 1942, serving as National Co-Chairperson of Citizens for Eisenhower Congressional Committee in 1953, and then candidate for the U.S. Congress from the 1st District of Colorado in 1954, the first woman in Denver to run for high office. Although she lost the election by a small margin, she was projected into ever more public service. She was a founder of the Republican Roundtable Club and served on Governor Love’s Local Affairs Study Commission 1964-1966 and the Colorado Commission on the Status of Women 1971-1974. Ellen also gained national recognition through appointments by Presidents Truman, Eisenhower, and Johnson, serving on various advisory councils, boards and committees, beginning in 1951. She was an Alternate Delegate to the Atlantic Congress in London in 1959.

Ellen Harris describes her mother as “a frustrated contralto from Michigan” who listened to opera broadcasts on the radio. Ellen was at first charmed by listening to recordings of opera singers, especially those of Luisa Tetrazinni (1871-1938), but when she saw the famous Italian soprano in person she was taken aback by her immense size and thereupon decided she did not like opera. Among the National organizations served by Ellen Harris are the Association of Junior Leagues of America, United States Committee for UNICEF, National Safety Council, National League for Nursing, Council for Nurse Training, and Advisory Institute of International Education. However, while at Smith College, a relative, Oscar Thompson, editor of Musical America, took her to the Metropolitan Opera and there she decidedly became fond of opera. Ellen’s love of opera continued and with her husband she attended many operas in America and abroad. She served on the Executive Committee of the Central City Opera Association from 1951 to 1970.

Ellen was asked in 1958 by Blanche Witherspoon, the former director of the Metropolitan Opera Guild and co-founder of a theatrical agency in Denver, whose late husband was Herbert Witherspoon1, to organize a Colorado-Wyoming-Utah Regional Audition for the National Council of the Metropolitan Opera. She gallantly accepted what turned out to be a challenging task. In a letter to Howard J. Hook, chairman of the National Council, dated October 16, 1958, Ellen notes that efforts were being made to have the audition in February, but finding persons to do the work and singers to audition was proving to be very difficult. She had only a vague concept of how to create such an event for as she states “Unfortunately, all local records appear to have been lost in the mails, so I have nothing to go on”.

She began by seeking patrons who would donate $250 each to the nascent organization. Only three or four were found who were willing to do so, an insufficient collection for defraying the costs of judges, awards and other expenses. Finally, a colleague on the Central City Opera board, prominent Denverite Eleanor Weckbaugh, generously provided $6,000, and with that most welcome gift the first auditions was finally to be realized.

The original Board consisted of Mrs. Omberg from the Lyric Opera, Mrs. Carpenter from the Civic Ballet, Mrs. McCarthy from the Antonio Brico2 Symphony, Mrs. Purdy from Central City Opera, and Ada Belle Spencer3 (who also was one of the first judges). Due to Ellen’s association with Colorado Women’s College board, she was able to get access to the newly built Houston Fine Arts Center to hold the auditions. She received help from the voice faculty of the Lamont School of Music of the University of Denver with the judging and she called upon Denver Symphony members for musical assistance.

During her beginning years she noted that no singers appeared from Wyoming and she was frustrated by the consistent winning of the singers from Utah. To understand why the Utah contingent was so successful, Ellen consulted with Maurice Abravanel, director of the Utah Symphony and Mormon Choir, and she traveled to observe auditions in other cities– New York, Chicago, Houston, Seattle, San Francisco, Los Angeles, and Detroit. She encountered a particularly memorable master class teacher in San Francisco, Lotte Lehman, from whom she learned a lot about the art of singing. Finally, after she invoked the help of Mr. Brown from the Santa Fe Opera as a judge and as a master class teacher to help in preparing Colorado singers for the auditions, a few of then began to be winners. In the meantime, the organization was expanding its board membership and adding patrons, from whom a $250 donation was required. Ellen was to chair the Rocky Mountain regional auditions for 6 years.

Thus began the auditions for the region encompassing Colorado, Wyoming and Utah, an annual event which continues to this day, and from which several operatic careers have been grandly launched. Ellen Harris, lively, elegant and attractive at 94 years, is one of our most cherished and honored patrons of the opera community. (Ellen died December 17, 2005, in her apartment at Park Place Retirement Center in Denver. She was 95.)

1Herbert Witherspoon, 1873-1935, American basso, b. Buffalo, N.Y.; grad. Yale, 1895, studied music with Edward MacDowell. He studied both painting and singing in New York City, London, Paris, and Berlin. In 1898 he made his operatic debut, and from 1908 to 1916 he was leading basso of the Metropolitan Opera Company, afterward devoting his time to concerts and to teaching. He was president (1925-29) of the Chicago Musical College, director for a brief time of the Chicago Civic Opera Company, and director (1932-33) of the Cincinnati Conservatory. In 1935 he succeeded Giulio Gatti-Casazza as director of the Metropolitan Opera Company, but he died shortly thereafter.

2Born June 26, 1902, Antonia Brico, Dutch-born, American symphonic orchestra conductor and talented pianist. Brico studied Bach for 15 years with Albert Schweitzer, studied conducting for six years with Karl Muck, conductor of the Boston Symphony (1913), first American to graduate from the Master School of Conducting at Berlin State Academy of Music, made her debut February 1930, conducting the Berlin Philharmonic, the first woman to conduct a concert in Berlin, and that July conducted at the Hollywood Bowl. In 1933 she conducted unemployed New York and Westchester musicians at the Metropolitan Opera House as a fundraiser and famed singer John Charles Thomas refused to appear on the program because her fame would have upstaged him. In November 1934 organized an orchestra of 100 women musicians who performed at New York’s Town Hall sharing profits since there was no money for salaries. Although highly praised by Sibelius amongst others, her conducting career only lasted a short time because, as she explained, “I was a novelty at first and by 1937 the conducting jobs disappeared.” In actuality Arthur Judson, who had a monopoly on conductors and managed the New York Philharmonic and the Philadelphia Orchestra, was merely following the opinions of Mrs. Charles S. Guggenheimer (B. 10-22-1882) whose purse strings were able to enforce her opinion “(that) the greatest disgrace in the world (is) for a woman to conduct the New York Philharmonic.” In 1942, Brico began directing and conducting the Denver Businessmen’s Orchestra in its five-concerts-a-year and continued for more than 30 years without a contract. In 1948 she was named permanent conductor and in 1969 the orchestra was renamed “The Brico Symphony” in her honor. She had turned to the teaching of voice, piano, and conducting to earn her living. One of her pupils was folksinger Judy Collins who with Jill Godmilow produced the award-winning film “Antonia: A Portrait of the Woman”, (1974) to highlight a career stymied by gender prejudice. She received an honorary Ph.D. from Mills College (1938) as well as more than eight other honorary degrees.

3Legendary for their generosity, Galen and Ada Belle Spencer touched the lives of Colorado residents through their personal and financial support of sports and music programs. Today, their legacy—the Galen and Ada Belle Spencer Foundation—helps sustain the activities that brought them so much joy during their lifetimes. The foundation annually disburses grants to opera companies, orchestras, higher education vocal music programs, entities that support young people’s musical efforts and training, and numerous Denver-area community groups. Born in the same year, 1905, Galen and Ada Belle grew up in Kansas within 30 miles of each other. Although their paths crossed during childhood and young adulthood, their lives followed different routes for some 40 years. While Galen worked in the family firm, Ada Belle schooled in opera and, as a vocalist, toured the country. The story of what eventually brought them together is a mystery. What is known is that when the general manager of the Metropolitan Opera invited Ada Belle to join the company, she declined. Instead, she chose to marry Galen. When the couple moved to the Denver area in 1951, they set out on a new course. Galen left his family’s Kansas companies, and Ada Belle exited the stage. Nonetheless, they continued to pursue their respective passions—sports and music. Ada Belle focused on assisting young vocalists advance their training. Among her musical activities, she judged auditions for the Metropolitan Opera Association National Council Rocky Mountain District. In 1982, she incorporated the Galen and Ada Belle Spencer Foundation.